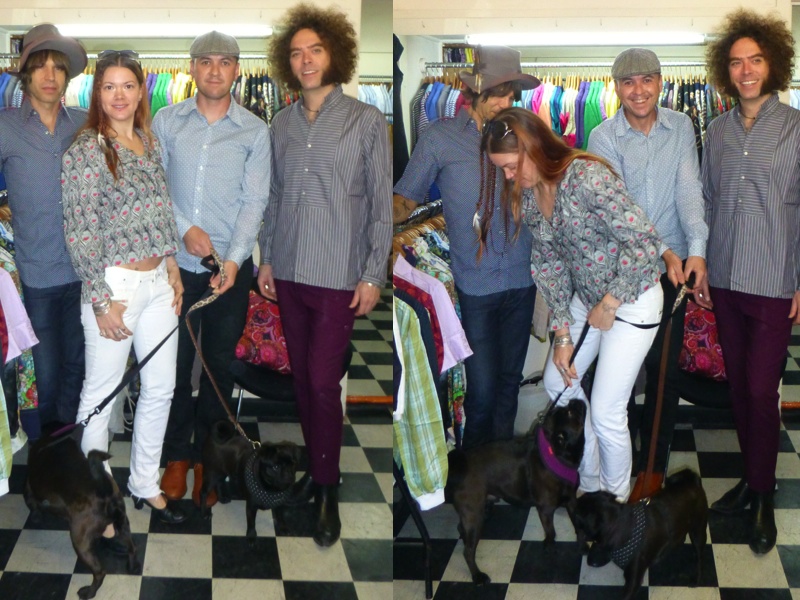 Those fine musical folks, The Dandy Warhols, heard about the treasure of garments at Archive, a Shop by Phillips through the grapevine and popped in for a look-see ahead of their appearance at Harvest Festival

Peter, Zia and Brent (Courtney was ill, unfortunately) had a rummage through the racks of Liberty print shirts, womenswear and bow ties and the seemingly unending archive of unworn vintage stock, from Phillips” CBD factory and warehouse.

Peter, Zia and Brent from the Dandy Warhols wearing their Phillips garments, with Matt and Audrey & Max The Pugs – friends of Phillips

A Lady Phillips “Sophie” jacket in Liberty casear peacock print caught Zia”s eye and she rocked it on stage at Harvest Festival in Melbourne, later that day where all four of the Dandys put on an absolute killer show! She also chose a Lady Phillips stripe shirt with a matching Liberty tie, two Lady Phillips bow ties and a liberty bow tie with matching pocket square which her friend will be wearing to the Dandy Warhols” Christmas dinner and show in Portland, Oregon.

Brent, who now lives in Melbourne, flexed his good taste and chose a simple stripe Phillips Vintage shirt and two bow ties,  and Peter selected a short sleeved Phillips Vintage shirt in blue and white spot that had been hanging on “Eric”, the quirky old hanger that takes pride of place at Archive, a Shop by Phillips.

Shirt and bow ties, chosen by The Dandy Warhols